Apple introduced the ‘Don’t Follow’ feature on iPhones and iPads with its iOS 14.5 update, which was introduced in April. First introduced with iOS 14 as part of the WWDC 2020 event, it was originally planned to be implemented earlier. However, Apple has given developers time to comply with its App Monitoring Transparency policy.

Application Monitoring Transparency; prevents apps you install on your phone from tracking you through third-party services and websites. In the ‘Don’t Follow’ section placed in the Privacy settings on the phone, you can turn off the tracking permission of anyapplication. One of the most opposed to this feature was Facebook.

The app you revoked permission to follow cannot use the IDFA (Apple Advertising ID) identifier on your iPhone and iPad. Developers need to be able to track you and access this identifier to customize your ad data. However, the app you don’t allow can’t access IDFA, they can’t show you custom ads because they can’t.

“Some of the most affected platforms — especially Facebook — have to build their infrastructure from scratchbecause of Application Monitoring Transparency,” Eric Seufert, an adviser to Adtech, told the Financial Times. Claiming it would take at least a year, Seufert said:

“New tools and frameworks need to be developed from scratch and thoroughly testedbefore they can be made available to users . I believe it will take at least a year to build a new infrastructure.”

Following the introduction of Apple’s privacy feature, Facebook asked iOS users for help. The company, which makes a significant portion of its earnings from personal ads, has asked iPhone owners for tracking permission. The social network, which uses phrases like “Help us keep Facebook free,” has been the focus of the backlash. 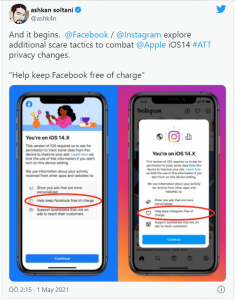 Not only that, Facebook has advertised full-page ads in newspapers in recent months. The company criticized tracking on iOS devices, saying “we stand up to Apple,” and warned small businesses that advertising revenue would decrease.

Apple did not respond directly to Facebook’s campaign. But months before the announcement, he accused the social media company of “not paying attention to user privacy.”

Snap Inc, the owner of the Snapchat app, said it made $1.07 billion in earnings in the third quarter of 2021. The company had forecast revenue of $1.1 billion in the third quarter. However, it turned out that he had not achieved this goal. Snap Inc CEO Evan Spiegel took aim at Apple — a 2015 president of the United