The crisis is escalating between Russia and Ukraine, where the world is holding its breath and watching. As tensions continue to rise at the border, back-to-back statements continue to come in. German Chancellor Olaf Scholz called the threat to European peace “very, very serious” for Russia’s invasion of Ukraine. Us President Joe Biden and Ukrainian President Vladimir Zelenski held a telephone conversation as the Washington Administration gave time for Russia’s invasion of Ukraine. In other news, Ukrainian Defence Minister Reznikov announced that his country has received 180 tons of ammunition from the United States.

The latest developments regarding the crisis between Russia and Ukraine are minute by minute;

21: 15 – US President Joe Biden and Ukrainian President Valdimir Zelenskiy spoke by phone. Biden reiterated the U.S. commitment to Ukraine’s sovereignty and territorial integrity, and made it clear that the United States, along with its allies and partners, would respond swiftly and decisively to any Russian aggression against Ukraine, the White House said in a statement. Biden and Zelenskiy agreed on “diplomacy and deterrence” in response to Russia’s military buildup on the Ukrainian border, the statement said.

21:05 – Ukrainian Foreign Minister Kuleba announces that Ukrainian authorities have called for meetings within 48 hours with Russia and other countries that are members of the Vienna Document, citing ‘Russia’s failure to respond to a request for information on military activities’.

20:10 – Ukrainian Defence Minister Oleksiy Reznikov says his country has received 180 tons of ammunition from the United States. “Our friends are not sleeping,” Reznikov posted on Twitter. Lithuania’s Defense Ministry also announced the sending of defensive aid to Ukraine over the weekend.

7:45 p.m. – Pentagon spokesman John Kirby joins Fox News Sunday. Asked what kind of intelligence was being obtained to suggest that Russia would invade Ukraine, Kirby said: “It was actually a combination of factors. What we’re seeing is an intelligence mosaic. I can’t specifically mention it, but our good intelligence sources and they tell us that the situation is heading towards becoming some kind of nursery opportunity for Putin.”

Addressing Russian President Vladimir Putin, German President Steinmeier said, “Do not underestimate the power of democracy. We want a peaceful neighborhood, we want mutual respect. Take the rope out of Ukraine’s neck and we will look for a solution together.”

Warning of the growing danger of war in Europe and blaming Russia for the tense security situation around Ukraine, Steinmeier said, “We are in the middle of a military conflict, a war in Eastern Europe, and Russia is responsible for it.” “It is impossible to misunderstand Russia’s deployment of troops. This is a threat to Ukraine. But the Ukrainian people have the right to live without fear and threat, to self-determination and sovereignty. We will respond decisively to anyone who tries to destroy it.” 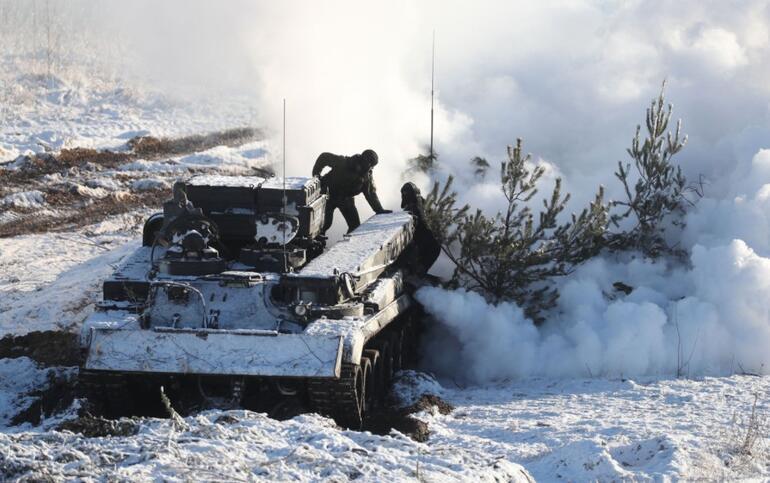 6.10pm – U.S. President Joe Biden’s National Security Adviser Jake Sullivan says today that Russia could invade Ukraine this week. Sullivan, however, expressed hope that diplomacy would prevail. “We continue to work on diplomacy, but we are also ready to respond jointly and decisively with our allies and partners if Russia moves forward,” Sullivan said.

18. 00 – As the Washington Administration gives time for Russia’s invasion of Ukraine, it is announced that US President Joe Biden will hold a telephone conversation with Ukrainian President Vladimir Zelenski.

17.45 – German Chancellor Olaf Scholz calls the threat to European peace “very, very serious.” “If there is a military attack against Ukraine, the reactions and carefully prepared sanctions will come into play,” Scholz said in a brief assessment after the election of the President in parliament.

5.30pm – Ukraine has pledged to keep its airspace open for international travel, despite warnings that Russian troops conducting drills near western borders could act for an invasion at any time.